In the first round, the competitors had to design two races' board games. They had to be easily rebuilt, or small enough, that anyone can carry them in their pockets.

The Fruits of Wit – a Hobbit game by Syrg 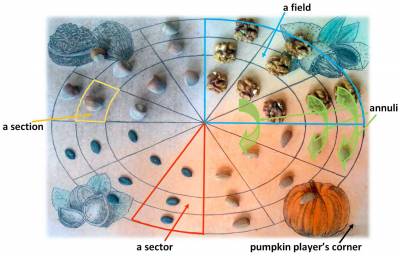 The game is an ancient Hobbit game played by four players. The players control a set of fruits (pumpkin, hazelnut, walnut or almond) each consisting of 9 pieces.  The goal of the game is to carry your fruits back to your field. The player who carries his fruits to his respective field (represented by the fruits in the corners) first wins.

2. The youngest player starts the game and the players take turns in a clockwise direction whilst carrying out ONE of the two possible actions.

3. The two possible actions can be either:

- Grabbing all the fruits from a section and putting them down in a clockwise direction beginning with the forthcoming section while remaining within the same annulus (ring) placing one fruit in each forthcoming section. In this action if the section contains various fruits, the player decides which fruit he places into each section.

- Grabbing all the fruits from a section and adding them to a nearby section within the same sector (eg. from the middle annulus into either the inner or the outer annulus).

4. In ANY players’ turn if a fruit arrives to its respective field AND is alone in its section, the owner of that fruit removes it from the sector and places it into his corner.

5. The player who collects all his fruits into his corner first wins the game. 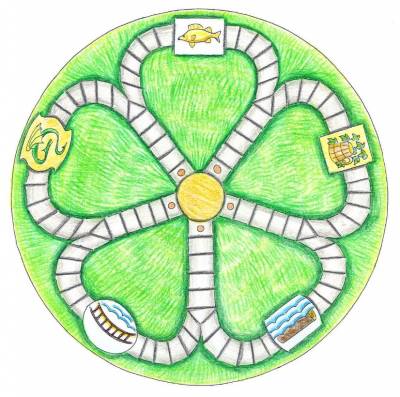 Shire Beer Race is a board game for a maximum of six players. The goal of the game is to be the first to have drank a pint of beer in each of the five Inns of Shire: Green Dragon, The Ivy Bush, The Golden Perch, The Floating Log and Bridge Inn.

The game is played on a circular board (see an attached pdf file). It also includes pint tokens to show which inns each player has visited (see an attached pdf file). Gaming pieces can be anything that happens to be at hand: small stones, hair pins, bread crumbs, whatever. One six sided die is needed as well as some coins or something else to represent the game money.

In the beginning of the game each player places their gaming piece on the plaza in the middle of the gaming board. Each of them throws the die in their turn and moves their piece into any direction they want. The pieces can only be moved in one direction on a turn, but it’s perfectly ok to come back the same way the next turn.

To get a beer a player must first get a coin to pay for it and then get into an inn to buy the beer. Coins can be gotten in two ways: If a gaming piece ends up in one of the squares nearest to the central plaza (these have been marked with little copper brown circles) on an even number, the player gets one coin. If two gaming pieces pass each other on the board, the player with more coins gives one to the player who has less.

When a player has at least one coin, they are able to buy a beer simply by going to an inn. An even number is not needed for this. However after giving the coin as a payment to the game bank and receiving a pint token, the player must wait for one turn (there is no sense to hurry drinking a good pint) before continuing on their way to get more coins and visit more inns. The winner is the player who first collects all five inn’s tokens.

The Game of Eagles 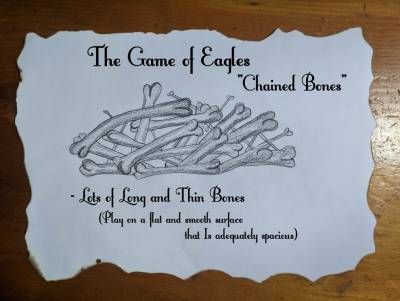 Middle-earth Eagles are proud and intelligent animals, famous for their keen eyesight, swiftness of movement, wisdom and strength.

Eagles are very competitive with each other, they like flying and speed competitions, they often play using their senses, such as sight when competing for who can see the furthest prey.

Sometimes, however, it happens that they gather near isolated places hidden in the mountains, to play more static games.

At every game they always bet something: the best location for building a nest, a mountain ram or something else, so they always work hard to win.

“Bones Chained” is one of the games that Eagles love the most, when they don't want to challenge each other with flight.

It is a very simple, small and portable game, you can play it anywhere there is a smooth and flat surface. Generally the players are 2 to 8.

Materials Needed for the Game:

- A bag, generally made of leather, used only to hold bones and carry the game.

Play on a flat and smooth surface that is adequately spacious.

Rules and Purpose of the Game:

Bones Chained requires the sac containing the bones to be emptied onto a flat surface.

When falling, the bones pile up in a disordered way and hook together through the protuberances at the ends.

At the beginning of each turn, each Eagle pronounces a word (it can be anything, an adjective, a verb, a name, an animal, a plant or other).

The Eagles, one at a time starting from the youngest, must extract a bone without moving the bones attached to it, using their beak. During the extraction of the bone, the Eagle must recite a rhyme poem, composed on the spot, which contains all the words previously spoken by the other Eagles and which has a logical sense.

If an eagle extracts a bone without moving other bones, it can continue to extract the next bone.

If he moves the other bones by extracting one, or if he fails to recite a poem containing all the words and which makes sense during picking up the bone, the turn passes to another Eagle.

Despite having different sizes, each bone is worth 1 point.

The Eagle who manages to score the most points wins.

Eagles love this game because it is an occasion in which they meet, have fun, train their senses and their mind, also demonstrating their ability to use different skills at the same time (sight, ingenuity, precision, memory, linguistic knowledge, mental agility, balance and more).